Heinrich Schütz (1585-1672) is justly celebrated as the greatest German composer of the generation before Johann Sebastian Bach. Apart from his first book of madrigals, he left almost no secular music; no score for his (1627) opera, Dafne has survived. Even though he was an outstanding organist, he published no instrumental music. Nearly all his surviving compositions are settings of sacred texts, many of them in the grand style of divided choirs he learnt from Gabrieli, others in the new, dramatic style of Monteverdi. 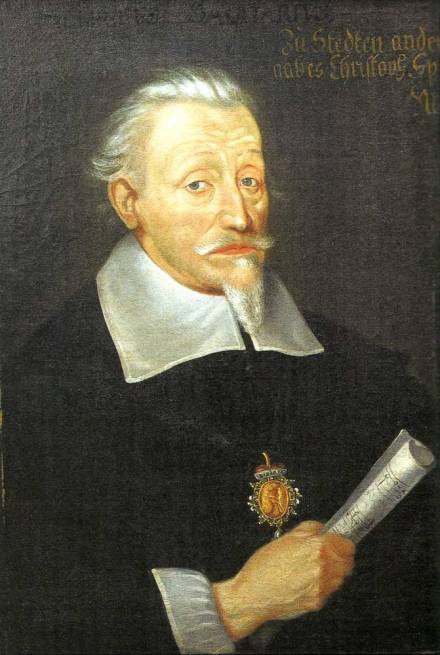 Schütz was born in Bad Köstritz, near Leipzig, and grew up in nearby Weißenfels. He sang as a choir-boy for the Landgrave of Kassel, before travelling to Venice to study with Giovanni Gabrieli. He then spent most of his life in Dresden, creating an impressive body of work including settings of the Psalms, Historia (story-telling oratorios) of Christmas and the Resurrection, Passions (according to Matthew, Luke & John) and the Seven Last Words.  The Italianate splendour of his style is proclaimed in the titles of his publications: Geistliche Concerte (two books) and Symphoniae Sacrae (three books) – spiritual concertos and sacred symphonies! Schütz returned to Venice in 1628 to study with Monteverdi, and travelled twice to work in Denmark.

Schütz was master of a great variety of 17th-century styles, from Flemish polyphony to the block harmonies of Italianate music for two, three or four choirs, from dance rhythms and folk melodies to the dramatic style of oratorios and opera. In all these styles, the music responds directly to the words, to the speech-patterns of language, to the poetry of the psalms, and to the drama of bible-stories. Even the most elaborate instrumental writing (violin double-stops, sound-effects of battle, rhythmic dances, thrilling fanfares and virtuosic passage-work) proceeds from imagery in the sacred texts.

It is sometimes suggested that Schütz reacted to Gabrieli’s teaching by imitating Monteverdi, whereas after studying with Monteverdi, he returned to a Gabrieli-like style with multiple choirs. Though there is a grain of truth in this, it misses the point that much of the later polychoral music is designed for flexible performance; during and after the 30-years war (1618-1648), German establishments could not always provide the full complement of musicians required for four-choir settings. Monteverdi’s influence as madrigalist and opera-composer is seen more subtly in Schütz’s response to Enargeia, the emotional power of detailed visual description. His favourite Psalm-texts display vivid poetic imagery; Bible-stories are represented as dramatic scenes in which voices and instruments take on character roles.

Psalm 150 invites ‘everything that hath breath’ to praise the Lord with songs and instruments. This ‘breath’ is renaissance Pneuma, the divine breath of life, the mind/body energy of human beings, and the mysterious Spirit of Passion that communicates emotions through poetry and music. Accordingly, King David’s musical instruments and dancing are heard in the grand harmonies of the Responsory and the slow Sesquialtera dance-rhythms of this Psalm. Similarly in Psalm 33, the words ‘sing to the Lord a new song’ call forth a fashionable instrumental effect: violin double-stops with tremolo. After this, the ‘string-playing with harp’ is set just as King David describes.

The cetra is the mythical lyre of Orpheus – in Monteverdi’s opera Orfeo a golden cetra played by La Musica not only flatters the ear but, as the lyre of heaven, it can move souls. Schütz sets Psalm 70, Eile mich Gott zu eretten, in the dramatic style of Italianate opera and his own oratorios. In contrast, the simple faith of Von Gott will ich nicht lassen is set to vocal and instrumental variations on a popular folk-melody known in Germany as the Christmas carol Nun helft mir Gottes Güte schon preisen, in France as the dance-song Une jeune fillette and in England and Scandinavia as The Queen’s Alman. 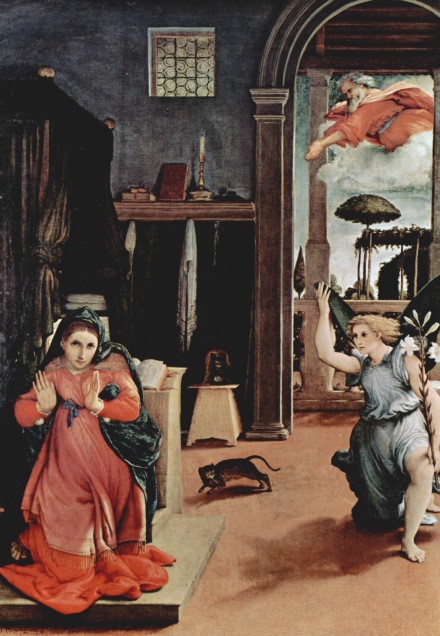 Episodes from the story of Christmas inspired many of Schütz’s compositions. A high tenor represents the Angel Gabriel in the Annunciation scene, leading to Mary’s great song of joy, the Magnificat. Schütz set this text many times; the setting in Symphoniae Sacrae II (1647) casts Mary as a solo soprano and recalls Monteverdi’s Vespers with its elaborate instrumental writing. As the scene changes to the fields where the Shepherds watch over their flocks, Schütz depicts the angel choir’s concerto with the serene harmonies of Andrea Gabrieli’s (1576) motet Angelus ad Pastores ait, brought to the German congregation as Der Engel sprach zu den Hirten. The choral melody Veni, Sancte Spiritus is ornamented in dance-rhythms, with glorious moments of Giovanni Gabrieli-like tutti at the sacred words O lux beatissima (O most blessed light) and sacrum septenarium (the sacred sevenfold gifts of the Holy Spirit). 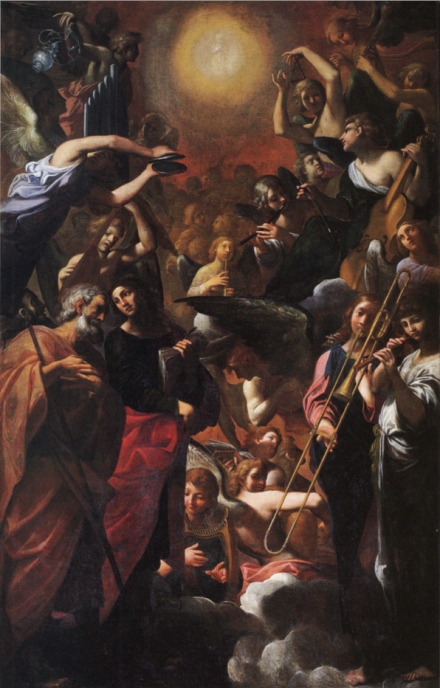 Later, the angel appears again to Joseph, warning him to take Mary and the Baby to Egypt, in order to avoid Herod’s wrath. Schütz casts King David as a bass, lamenting the death of his son, Absalon, amidst the solemn sonority of four sackbuts. In Psalm 68, paying homage to Monteverdi’s Combattimento, violins imitate the sounds of battle as God arises to destroy his enemies: but the righteous rejoice with the party-music of ciacona, citing Monteverdi’s Zefiro torna. Pharaoh’s army are drowned in the Red Sea (Psalm 136), but God’s goodness endures forever. Schütz depicts divine eternity with seemingly endless repetitions of the psalmist’s refrain, culminating in a final fanfare. No score is provided for this, since each Prince would have his own fanfare, which his trumpeters would play (from memory, of course) whenever required.

Baroque composers were utterly practical. Schütz explains how his music is scored flexibly, and can be adapted for various combinations of voices and instruments, for larger or smaller ensembles. In that period, the art of contrafactum, the skilful re-arrangement of pre-extant material, was greatly admired, and several of Schütz’s compositions adapt or refer to Italian originals. In general, 17th-century music was not conducted: one of the great ironies of today’s Early Music is to see an ensemble of period instruments or renaissance singers directed in 19th/20th-century manner by a conductor standing in front! However, in polychoral music it was customary to have several conductors simultaneously, one for each choir, relaying the Tactus around the building. Praetorius’ (1620) Theatrum Instrumentorum shows how German ensembles managed this (for us today, unfamiliar) practice.

Large-scale performances would of course have an artistic director, known in early 17th-century Italy as the Corago, who would take directorial decisions and coordinate rehearsals, but who would NOT conduct the performance.

With no conductor to warp time with romantic rubato or rallentando, each musician shares responsibility for maintaining the Tactus, that earthly microcosm of the hand of God directing the perfect rhythm of the heavens. Tactus also represents the human pulse, which should not falter or stop. So, if the time was kept steadily, where is the expression in 17th-century music? Schutz inherited the Flemish polyphonic style, in which individual voices clash in emotionally-laden dissonances, then resolve into gentle consonance. And he studied the Italian seconda prattica, in which Enargeia in the imagery of the text powers dramatic effects in the music, and the force of Pneuma transmits emotions to performers and listeners. Modern audiences, like a baroque congregation, are invited to apply the force of their own imagination to create a Theatre of Instruments, transforming Schütz’s music into dramatic scenes of Angels and Shepherds, King David, holy Mary, and Biblical battles.

Please join me on Facebook https://www.facebook.com/andrew.lawrenceking.9 and visit our websites:

http://www.TheFlow.Zone  [Flow for optimal creativity, The Zone for elite performance]

Opera, orchestra, vocal & ensemble director and early harpist, Andrew Lawrence-King is director of The Harp Consort and of Il Corago. From 2011 to 2015 he was Senior Visiting Research Fellow at the Australian Research Council Centre for the History of Emotions. He is now preparing a translation of Bonifacio’s (1616) Art of Gesture and a book on The Theatre of Dreams: The Science of Historical Action.

One thought on “Heinrich Schütz: Polychoral splendour & the Enargeia of early opera”