The Mountains of Morne lie ahead, it’s high time to Strike Upwards! 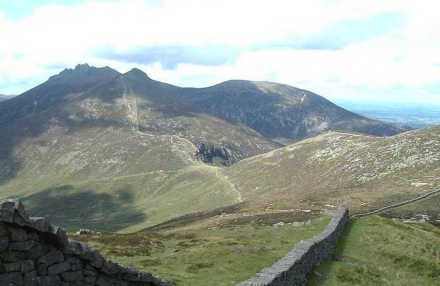 The same combination of finger-movements that we learnt for the Long Shake here is just what we need for what Bunting calls Activity of finger ends, striking upwards. He gives the Irish name as Barlluith-beal-an-airdhe.

As with the Triple Shake here the finger-movements are a short segment of a Long Shake. But now the segment is slightly longer, and the sound that results is rather different. Here it is in modern notation (3 = middle finger, 2 = index etc).

Start as for a Long Shake with 3 2 4 2 (fingers 3 and 4 are both on the same string, in this case, F#).  Then instead of playing another note, just let finger 3 come to rest on that same (F#) string, damping it. Meanwhile, the finger-2 string (G) rings on. And that’s all there is to it!

As with all ornaments, practise the finger-movements slowly, getting them perfectly right, before trying to speed them up. If you’ve followed the sequence of ornaments so far, you should find this one fairly straightforward to play. But its name hints at some subtle details of how and where it might be used.

“Striking upwards” characterises this ornament as ‘upward’ – the ornament moves from low to higher. The main note is the last one, which is sustained (in this case, the final G). As for all ornaments of this period, the Striking Upwards should begin on the beat. A good way to be sure of this, is to make sure that the first note of the ornament coincides with the bass note. In this case, that would probably be a bass G, perhaps even a full chord of G major (Bunting’s full hand). This will produce a strong dissonance as the F# of the ornament clashes with the G in the bass. So this upwards ornament will strike firmly.

A good place to use this ornament is where the melody approaches a long note from below. For example, in the first tune of the main part of Bunting’s 1840 collection, Sit down under my protection the first two phrases both end this way. Here I’ve transposed Bunting’s arrangement into G major, simplified the accompaniment and – in the second line – added Striking Upwards:

Probably one would choose to add this ornament only in one of these two Upward locations, but either is possible. And both produce a clash, a Strike of the ornamented melody against the bass.

One last comment. It is just possible that this ornament, played three times in succession, is what Bunting meant by his enigmatic Triple Shake. We don’t know for sure, because Bunting does not show the damping for his Triple Shake, and the one application of it in the whole of his output is problematic. In my interpretation of the Triple Shake here, it begins on the main note, like the other Shakes.

In contrast, Striking Upwards begins on the lower auxiliary, which is what produces the Striking effect. So Striking Upwards does not seem to belong to the category of Bunting’s Shakes. And the threefold dissonances of a triple Strike would be a departure from the harmonies that we see elsewhere in this repertoire. But there is certainly room for debate here: I look forwards to your comments.

Opera, orchestra, vocal & ensemble director and early harpist, Andrew Lawrence-King is director of The Harp Consort and of Il Corago, and Senior Visiting Research Fellow at the Australian Research Council Centre for the History of Emotions.

One thought on “Irish Harp Ornament of the Month #4: Striking Upwards”